(Pencils) First up, the most amazon of any non-(actual) Amazonian… (done as one of a number of pencil sketches for Sketchtember 2018). Loved the recent Mitch Gerard’s and Tom King 12 issue Mister Miracle book too… just great. 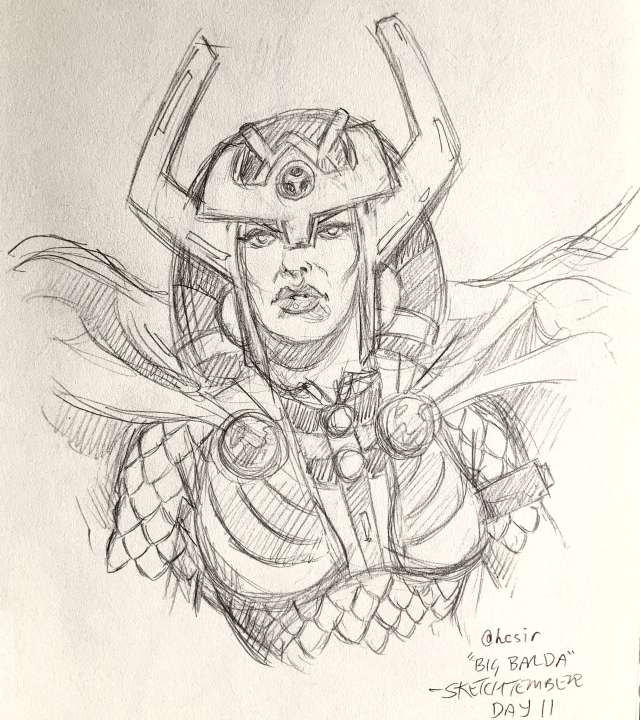 (Inks over Pencils) Dream of the Endless from The Sandman… a little riff on the scene between Morpheus and his son (here with an attempt at a likeness of the author) that appeared in the books. Done as part of the 2018 Inktober images.

(Inks over Pencils) I love those big sprawling myth based books from Vertigo/DC… and though dubious at first, totally became enamoured of the Lucifer books by Mike Carey, he seemed to have a real sensibility/sensitivity to writing characters that conveyed that distanced mythic creatures. One stand out issue for me was “Bearing Gifts”, issue 33 with amazing art by Dean Ormston. It introduced the character Zime’t, one of the Lilim. I was hooked… hence two goes at the character for Day 7 of 2018’s “Sketchtember”.

(Inks over Pencils) Being a Vertigo fan means that I’m more JLA Dark than just JLA, but Martian Manhunter was always a fascinating character… I loved the all too brief Waid/Ross appearance in Kingdom Come, and am really enjoying the Steve Orlando and Riley Rossmo version currently on a 12(?) issue run (as of April 2019).

(Pencils) I drew this Joker image along with a bunch of other character sketches “live” behind the table at the Bridlington Comic Con (August 2018).

(Inks over Pencils) A responce to the “Bottle” prompt from Inktober 2018, so Kandor in the creepy multiple hands of this creepy looking Brainiac.