Hello! I’m Gareth Sleightholme. I draw and write comics (amongst other things), mostly about monsters and the people that hunt or are hunted by them… 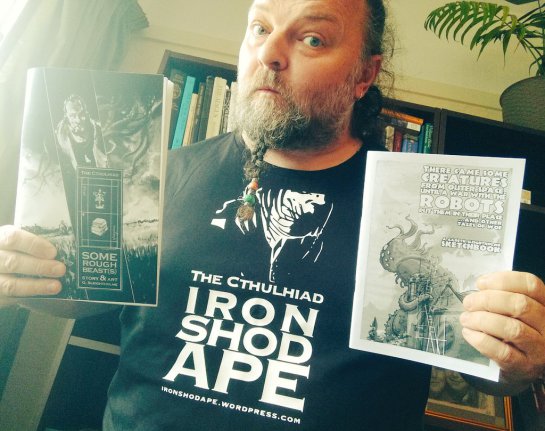 And welcome to the shinier Iron Shod Ape Comics blog*, if you’ve just stumbled across IronShodApe, we were originally set up as a creative collective of comic book fans who decided to have a go at making our own books… and of course occasionally working with others on theirs. This ethos continues, but at the moment you might mostly find work by me (Gareth) on here. Though there will be be more collaborations with the original tram soon I hope.

If you are interested in collabs, pin-up art, cover art, straight forward work-for-hire interior comics art for your comic, or even bonus art for your comic kickstarter, you can contact us via – hesir@hotmail.co.uk or tweet/DM me @hesir. For more about all that, follow this >LINK<

The last 24 months have been weird but great. I quit my job at the art school I had worked at for the previous ten years, not an easy decision, as I enjoyed teaching a great deal. So it was with some trepidation I found myself saying the words out loud, “…right, that’s it, I’m now doing comics!”,

And though I’ve certainly got a long way to go to turn this into a fully viable career path, I am enjoying it. As you might have seen if you’ve seen me at the various cons I’ve tabled at over this last two years, TBF19 & 18, Glasgow, True Beleivers, Nottingham, The Lakes and Bridlington & Hull Comic Cons.

And I have to say “Cheers!” to everyone who has shown enough confidence in me so far to allow me to contribute to their projects. And thanks for the great support from those who have given us great shout outs and RTs etc. 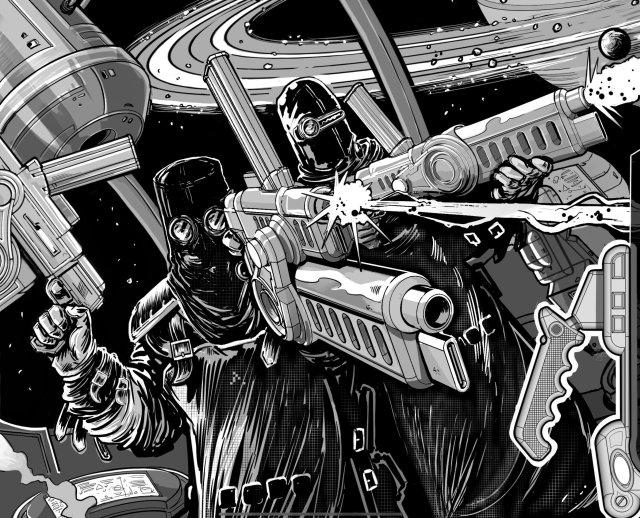 So what am I working on? Well there’s Space Warp (early promo art above), from none other than the Godfather of British Comics, Pat Mills and his Millsverse books.

I’ll be talking more about this on the IronShod blog but, needless to say, its great to be part of this, working with a writer whose work and legacy has been such a big part of my (and many others) formative comics years. You can also see Pat talking about some of the designs I sent through in the early stages of the project HERE. 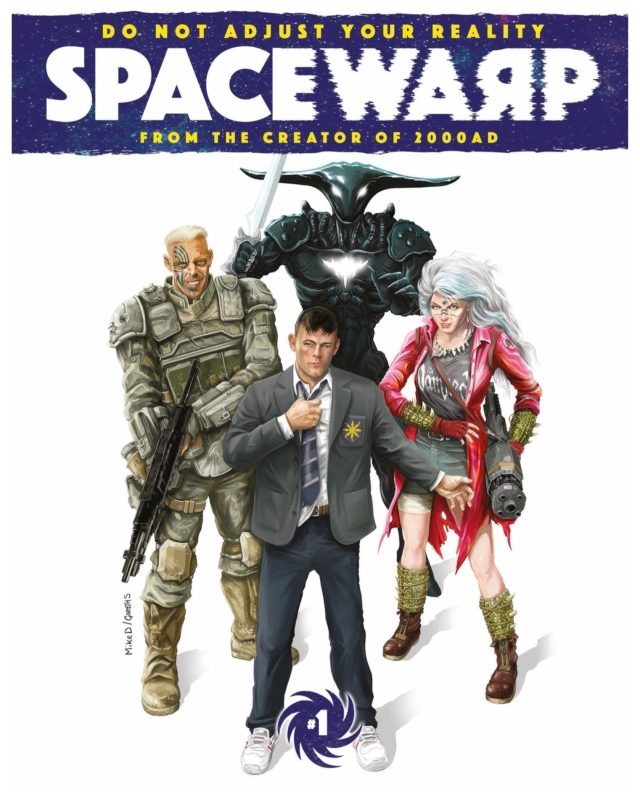 The book is out now (as of the end of July 2020) and available on Amazon and Comicsology: 6 stories, 70+ pages, painted colour colour by myself (pencils by Mike Donaldson), and black and white art interiors. With bonus material available on the site.

And there is a bunch of Spacewarp merchandise available HERE too, including t-shirts with art by yours truly. 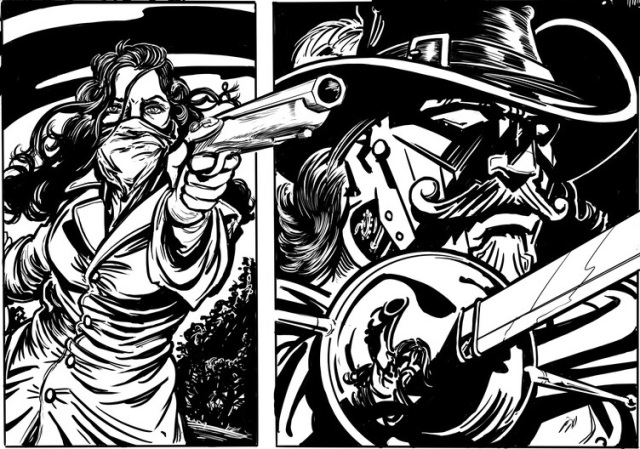 I’m also the new artist on Steve Tanner‘s Flintlock (above), over at Time Bomb Comics. Again a great project to be involved with. You can read more about that HERE.

Book Four is complete and out in the world, and art work on book five should be complete by Autumn 2020.

You can find some process stuff in the video above from Book Four of Flintlock and below a speedy process of a Kickstarter print done exclusively for one of Steve Tanner‘s other period comics, Dick Turpin and The Vengeful Shade.

I was lucky enough to be involved in a small way with the Cooper Gallery in Barnsley’s excellent Kapow show last year (you can find out more about that HERE, as well as other comics workshop projects) . And this year am working with them and Elsecar Museum to produce a comic call the “The History Kids in The Mystery of the Whirlygig”.

Other stuff completed or still in the pipeline…

There should also be another book from the ongoing collab’ with Madius Comics‘ Rob Jones, though on hold for a little while there, it should be out this year. The third in a trilogy of our Viking Saga stories and this one is going to be a doozy, all pencils are complete and I’m part way through inking it.

There is also the book I’ve been working on with Vince Hunt (Writer/Artist of the Red Mask From Mars, and one third of The Awesome Comics Podcast), more to come on that later, but we should something on that this year too, despite the delay.

It was also great to be involved with the excellent Kickstarter pulled together by Rob, Mike and Alisdair (Madius, Little O) for the collected edition of Tragic Tales of Horrere. Its been out a while now in this new printing (120+ pages), but it is beautifully put together, and It’s great people are getting to see it on the tables at this years events/comic-cons.

And though it’s hard to believe, there’s yet another, still to be announced comic project I’m working on, which should be great. Looking forward for that immensely.

All that, plus new work on my The Cthulhiad books, and maybe some other fun comics and comics art stuff too. Again, check out the blog for more on all that.

Oh! And now that I mention it, about The Cthulhiad… Books 1 & 2 – “Severed Head Cult” and “Vanitas” are now available on the Comichaus app if you are a subscriber… get over there and check it out, leave a review. (you can find a bunch of reviews of the series here along with reviews of other comics work).

Oh, and in amongst all of that I somehow found the time to get married to Sarah, the woman who nearly a decade ago stood next to me at Thought Bubble as punters, and said. “So how come you don’t have a table here? You love this stuff, I don’t get it, you should get a table”.  Its really all down to her to be fair.

So all in all, I guess it’s going pretty well. 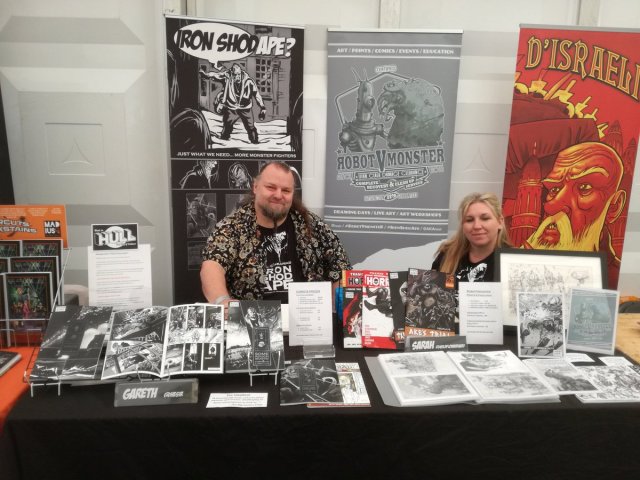 Cheers to those of you who said cool stuff about us on the internet, you have no idea how much it helps, thank you. If you get the chance drop by our future con tables and say Hi… more info here:

*…our previous blog is still available here – https://ironshodape.wordpress.com/ – should you wish to see some of the old posts.