Over the last few years we have showcased titles such as:

The Boatman, Beached Rockets and several books from The Cthulhiad (Kuh-Thoo-Lee-Ad), as well as joining forces with indie powerhouse Madius Comics to publish two of a loose trilogy of Viking Saga books; The King’s Leap and Ake’s Trial (the third is coming soon!).

If you would like to review or help promote our books we have digital press packs ready to go… just drop us a line at hesir@hotmail.co.uk

Meanwhile, here are some nice things people in the comics world said about the books… (the full reviews can be found in the header links). 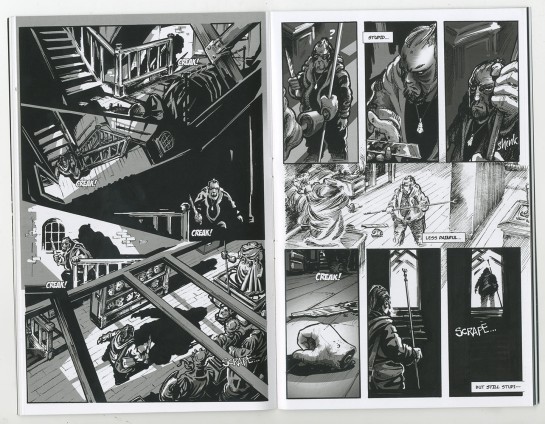 “Dialogue is great, the story moves at break neck pace.”

“Glorious thick, dark inking and great use of shadow. Add to that great character work and design and it all adds up to make this book a pleasure to look at.”

“…this is is the first book I’ve read in The Cthulhiad series. Severed Head Cult has left me chomping at the bit for more. I want to know everything there is to know about this comic universe.”

– Stevie Robinson, Other Worlds Than These.

“a harrowing tale of monster hunting. Sleightholme choreographs an excellent fight scene with a creature that flows like water…”

“…part of Sleightholme’s Cthulhiad series. If this is what can be expected from it, I’m definitely interested in seeing more. He’s created a terrifying world dripping with mythology and lore.”

“In a world of quick, efficient storytelling and conventional three-act structures, the Cthulhiad stands alone like a bewildering tower of Lovecraftian passion and excess.  Challenging to read and gorgeous to look at, this is a series designed to reward the patient…”

“Intricately detailed and packed with expression and dynamism,”

“…it’s Sleightholme’s artwork which is clearly going to provide the main selling point for the Cthulhiad.”

Praise for “The King’s Leap”:

“The King’s Leap serves as an eye-opening broadening of the Madius Comics horizon, and firmly cements Gareth Sleightholme as an absolute must-watch artist.”

“I was unfamiliar with [Gareth’s] work before this, but I’ll be sure to keep an eye out for it from now on… action sequences are as fast-paced as the script. Here there be monsters, and Sleightholme draws some fantastic ones, creatures that recall Lovecraft and those great beasts in Pacific Rim.” 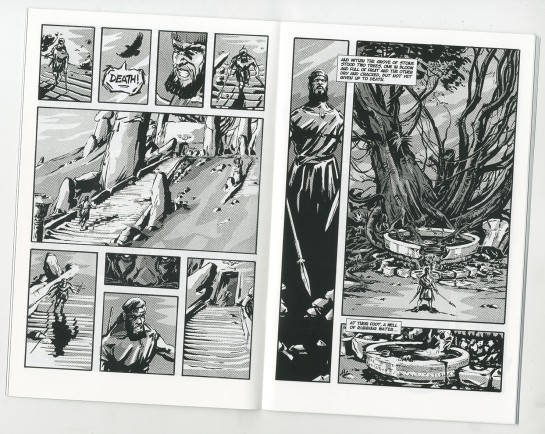 …elsewhere including praise for (writer and artist on the Cthulhiad) Gareth Sleightholme‘s other comic art on books like Horrere.

“[Gareth] packs a hell of a lot into his panels. The details in the line work are jaw dropping and the panel layouts are just great…” – Stevie Robinson, Other Worlds Than These.

“…look at this artwork. Isn’t its messiness grand?” – Jessica Maybury, Girls Like Comics.

“The visuals were amazing too …almost overwhelming but in a really good way that adds to the buzz of the terror” – Susan Omand, Garbage File.

“The artwork by Gareth Sleighthome is incredible; packing each frame with more details than you’ll take in right away” – Kieran Fisher, ThatsNotCurrentBlog.

“Sleightholme does another stellar job with the visuals, proving that he’s equally adept at zombies as he is with swords and sorcery…” – Craig Neilson-Adams (AKA Ceej), Big Comics Page.

“[Gareth’s] work in this short is fantastic, looking like something that would be at home in 2000 A.D. or any of the other top anthologies on the market.” – Brad Gischia, BagAndBored.

IF YOU PICKED UP ANY OF OUR BOOKS, LAST YEAR’S “AKE’S TRIAL”, OR “100 DRAWINGS”OR PREVIOUS YEARS BOOKS SUCH AS “THE KING’S LEAP”, “VANITAS”, “SEVERED HEAD CULT”, “THE WHITE SHIP” OR “DRAKON”, AND YOU LIKED WHAT YOU READ… PLEASE, PLEASE LET US KNOW.

…this blog is a work in progress, put together as we geared up for our first gig (back in November of 2012) at ThoughtBubble, where we launched Beached Rockets and The Cthulhiad/The Indian Fighter.

Let us know if there is anything we can do to improve it or anything else you would like to see on here.